«WHEN the Cuban government said in December that it intended to let the population buy modern cars without requiring permits, many suspected there would be a catch. They were right.

The cars, which can only be bought through state-owned suppliers, cost a fortune. A 2013 Peugeot 508, marketed in Europe as an affordable saloon car costing around $30,000, has a price tag of more than a quarter of a million dollars at a rundown showroom in Havana. A Chinese Geely, with more than 80,000 kilometres (50,000 miles) on the clock, is on sale for around $30,000. The average salary in Cuba is less than $20 a month. “What do they think they are selling? Aeroplanes?” jokes Erik, a handyman, as he looks at the price-list. “They don’t want to sell any cars. It’s all a show,” agrees Ernesto, a mechanic. (...) 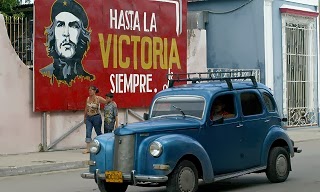 “There could hardly be a stronger signal that this remains a controlled economy,” says one Havana-based diplomat. Since taking over as president from his brother Fidel in 2008, Raúl Castro has taken some steps to reduce the state’s economic role. He has allowed small-scale self-employment, permitted Cubans to buy houses and given private farmers more autonomy to grow and sell their produce. But he has always insisted such reforms will be “without haste”. Now there are signs that he is deliberately slowing things down.

On January 1st, the 55th anniversary of the revolution, Mr Castro gave a speech in Santiago, Cuba’s second-largest city. He made no mention of further reform, instead castigating unnamed foreign groups for attempting to introduce “neoliberal” and “neocolonial” thinking.»