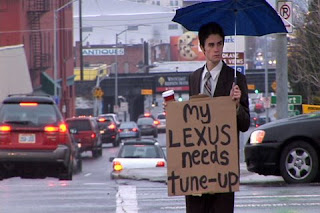 «It's hard to know what to make of the sad spectacle offered this week by the top executives of the country's carmakers begging for money from the government.

For the carmakers, you have to wonder how they could be so out of touch with the zeitgeist. Sure, their cars aren't as bad as they once were, and sure, millions of people buy them every year. But it beggars belief to hear General Motors Chief Executive Rick Wagoner earnestly tell a House committee that the problem is that customers can't get loans to buy cars. Chrysler may be a private company these days, but sending Bob Nardelli to Washington to ask for money was a huge public relations blunder. One could imagine a member of Congress simply telling Nardelli that if he thinks Chrysler needs money so badly the former Home Depot CEO could lend it some of the more than $200 million he pocketed while he ran that company.»